This guest article was written by William Laraque who is the Managing Director of US-International Trade Services.

The Citibank experience with fintech and this financial institution’s management’s emphasis on financial innovation, is symptomatic of what is wrong with global banking and with many alternative versions of nation-building.

Lending Club is one of many innovations in fintech watched by Citigroup as, along with the rest of the banking industry, it reacts to what Jamie Diamond of JP MorganChase terms “Silicon Valley is coming”.

Fortune magazine has just published an article praising Citibank management and its adventurous démarche into fintech. In reading this article, I am reminded of my own experience at Citibank and financial innovation dating back to the time that Bob White and his Ford-indoctrinated whipper-snappers were turned loose in Citibank’s Operating Group.

It was a disaster as legacy systems were replaced and people were laid off before the betas were even tested. The same McNamara-inspired “innovators” believed then that the Vietnam War would be won if only we dropped enough bombs and fired enough rounds. The mantra of that day was ‘peace through fire superiority’. I know because I was there.

Needless to write, this philosophy and its blind followers caused an unmitigated disaster in the run up to 2008. The US learned nothing from Vietnam and again tried its hand at nation-building in Iraq and Afghanistan. All of these efforts have so far failed.

“The past is never over,” as Faulkner reminds us, “it is not even past.” We will be sending 500 more troops to Iraq, to capture Mosul, will prolong the US troop presence in Afghanistan and additional US brigades will be used to reinforce NATO in Eastern Europe. It is all deja vu all over again.

– There are 1,379 fintech companies with combined funding of $33 billion.

– Fintech is expected to garner over $100 billion in revenue in 4 years.

– It is expected by Citigroup that fintech will wipe out nearly 1/3 of bank employees in the next 10 years.

I readily concede that Fortune is not the most astute of financial magazines. The author of the above referenced article did note that fintech type organizations have tried to replace banks before:

– In the 1980s, Sears bought Dean Witter and launched Discover card and sold it a decade later.

Lending Club, a fintech parvenu, has been plagued with by now well-known loan losses, use of algorithms to make credit decisions, management difficulties, and an 80% drop in share price, among other trials and tribulations. An industry insider declared that fintech startups would have great difficulty in scaling. A much larger problem lies just beyond the horizon however.

I have seen the hubris of the fintech gurus before. I saw them in 1976, at Citibank. These parvenus see the solutions to consumer banking as being a technological problem. They see the solution to all banking as being technological. It is not! The brightest men and women in the room see foreign money transfer as being “a pain in the ass”, to quote one of them. Fintech startups have not yet undertaken global trade settlement.

Back to the article in Fortune. The banking industry does not even realize who their biggest fintech competitors are because of their abject lack of knowledge. The chart below is copied from Fortune and indicates who the banking industry perceives as a threat. As e-commerce spreads across borders, platforms like Amazon, Alibaba, pose the greatest threat to the banks.

As the US found out in Vietnam and should have learned in Iraq, Afghanistan and Syria, the greatest threat to traditional thinking is the asymmetrical threat, the threat that banking will be displaced not by the things that we anticipate and project but by things, processes and cultures that the industry has very little understanding of and therefore do not see coming. 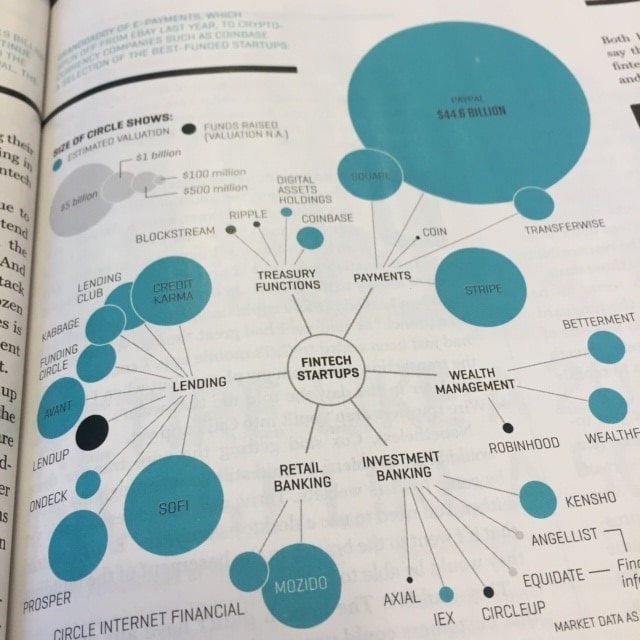 As it is with battle, it is with banking. The fintech gurus have no idea and do not possess the knowledge to know what is coming; but hey, ignorance is bliss right?