On Friday, the Governor of Bank of Japan (BoJ) Haruhiko Kuroda stated that at the moment there aren’t any plans to cut interest rates. After the statement, the USD/JPY pair fell to 113.10, due to the change in expectations that the BOJ will take additional easing measures in its next policy meeting in March. 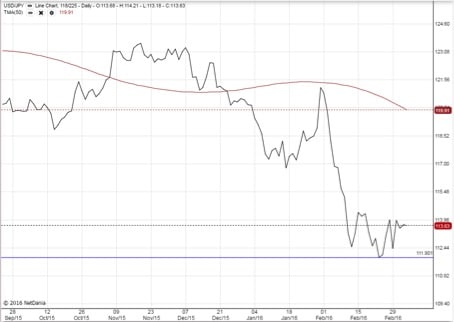 On the other hand, Kuroda stated that the BoJ will ease without any hesitation if it is necessary, using three dimensions of policy choices: quality, quantity and rates. Despite the positive information and the weakness in the dollar, the yen continues to decrease amid fading risk aversion pressure.

Kuroda also said that banks have ample capital and that profits are good amid the backlash suffered in Jan. 29 when the decision was made to charge commercial banks for cash shares parked at the central bank. This new policy was introduced as part of the monetary easing, and it charges 0.1% above a certain threshold.

The BoJ’s Hiroshi Wakaso also signaled that the central bank is expected to reduce rates further but not immediately, because the markets still need to digest the negative-rate policy fully before making any new moves.

According to Kuroda the negative rates will help the bank achieve its goal of 2% inflation in the first half of the 2017 fiscal year.

In late January, some of the banks decreased their mortgage rates and also they lowered the deposit rates as the negative interest rate decision passed, which made the yield on the 10 year government bond go into negative territory. This caused the sell-off of bank shares amid fears of profits being hurt by the negative rates.

Government borrowing costs staggered on Friday as the Bank of Japan’s purchases lowered yields, with super long yields reaching record lows, as a result of the BoJ bringing longer-yielding debt in its ultra-massive QQE program. The 10-year Japanese bonds moved with more than 2 basis points to -0.034% during the session. Looking at the super-long sector, 30-year borrowing costs decreased more than 5 points to 0.720% after reaching 0.707%. 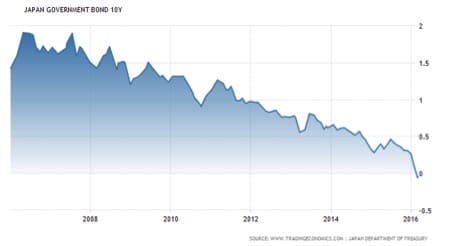