Although the decision by the Bank of Japan to take interest rates into negative territory was undoubtedly not an easy one to make, the actual results are far from what was intended.

Despite the need to keep the currency weak to stoke inflation, the central bank has been unable to effectively drive the yen higher as evidenced by the recent slide in the EUR/JPY pair.  While part of the difficulty can be attributed to the most recent monetary policy adjustment undertaken by the European Central Bank, a multitude of factors continue to add to the yen’s recent strength.

As the global outlook darkens further and central banks in other advanced economies accommodate policy even further to maintain or weaken currency valuations, the Bank of Japan faces a challenging mission in meeting Prime Minister Shinzo Abe’s ambitious objectives.

The foray into negative interest rates has had mixed results on the whole for many advanced economies busy experimenting with different ways to insulate themselves from external developments.

In certain situations measures have been effective to a degree, but the costs might invariably outweigh the potential reward. With respect to the Bank of Japan, officials are abandoning traditional policies limiting direct intervention, opting on more than one occasion recently to sell tremendous amounts of yen to weaken the currency.

In nearly every case, the benefit has been limited, with the half-life of an intervention only lasting a few hours.  Another round of stimulus is unlikely to be forthcoming in the coming months following the decision to take rates to -0.10% back in January.

March’s decision to hold fast on policy was viewed as a net-negative, pushing yen appreciation and indicating a serious policy blunder.

Matching the Bank of Japan, the European Central Bank has also begun experimenting with negative rates and expanded asset purchases in an effort to drive inflation higher.  However, unlike the broken Japanese transmission mechanism which saw the yen appreciate after recent accommodative actions, the euro seems to be slightly more responsive to the latest round of shifting policies.

After the initial exuberance witnessed in the euro following the most recent ECB decision earlier in the month, the euro is once again on the slide as evidenced by its partial retrace of the move higher on March 10th.

Unlike the Japanese who are increasingly running out of options to alleviate conditions, the Europeans still have more maneuverability and firepower to fight deflation.

In the meantime, the expanded asset purchases should put additional pressure on the euro as the money supply is expanded to help restart stalled lending conditions across the eurozone. 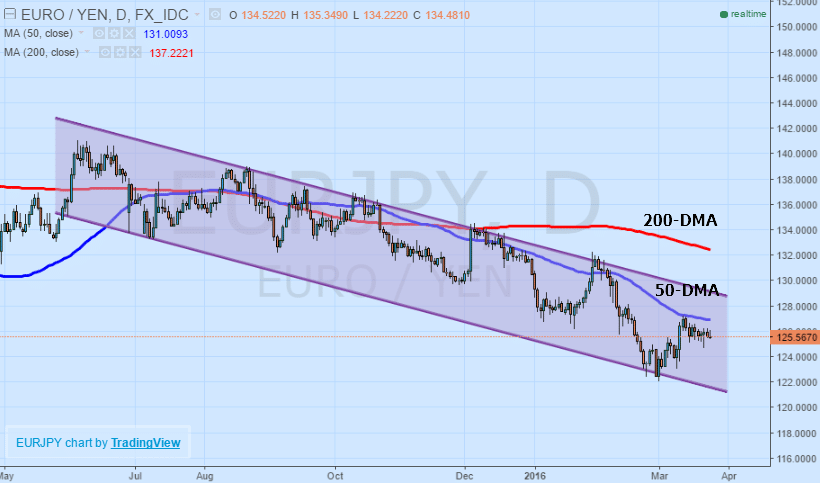 From a technical perspective, ongoing bearish momentum remains largely intact and shows few signs of reversing.  On a longer-term basis, the downward trending equidistant channel formation has a predominantly downside bias that has been unbroken for nearly 9-straight months, highlighting the strength of the pattern.

Although currently trading in the middle of the channel and not necessarily an ideal entry point, patient traders would be wise to wait until the pair rebounds a little further towards the upper channel line before taking positions predicting additional downside in EUR/JPY.

With the 50-day and 200-day moving averages both trending lower above the EUR/JPY price action, both indicators are acting as resistance against any sustained correction and reversal higher. Ideally, positions would be wisely initiated near 128.000 with 120.00 as the target.

On a more short-term basis, the emerging descending triangle pattern is complementing the longer-term bearish bias in the EUR/JPY pair.  The triangle formation which is formed by the EUR/JPY price consolidation between the near-term downtrend line and horizontal support at 125.05 is traditionally a formation that is accompanied by downside.

Trading the consolidation between the trendline and support is unwise owing to the narrowing reward conditions and greater, whereas awaiting a breakout provides much more reward potential.

Although there was a break below support back on the 22nd, the lack of a candlestick close below the level indicates a false breakout or fake out move.

Ideally, once a candlestick closes below the level, the breakout is confirmed with price-momentum lower accompanied by higher than typical trading volumes.  Ideally, positioned will be initiated at or below the support level to exploit the breakout potential.

With the combination of accommodative policy and technical indicators setting the stage for the further downside in the EUR/JPY pair, the only real threat to a prolonged period of losses in the pair is fundamental data that shifts perception on the future of monetary policy.

Should the Bank of Japan determine that more stimulus is required to ensure a successful weakening of the yen, it could derail recent EUR/JPY momentum lower.

Conversely, should the eurozone show stronger signs of growth, healthier inflation, and better lending fundamentals, it could see recent policies reversed and abandoned.

However, based on the current fundamental backdrop, only these two unlikely scenarios could provide the grounds for a longer-term reversal in EUR/JPY momentum.

With technical indicators heavily bearish on the outlook and global economic conditions still worsening, the ongoing EUR/JPY trend is likely to stay intact over the medium-term.