The price of second biggest cryptocurrency Ethereum continues to slide down, dropping by about 17% in the last week alone. In accordance with the ETH/USD exchange rate, the total market capitalization of the Ethereum blockchain has fallen by about 36% from July’s $1 billion figure to just under $640 million today.

The disappointing performance by Ethereum is in sharp contrast to Bitcoin which continuously maintained its high level, at around the $750 price range and $12 billion market cap, despite having difficulties of its own.

This divergency between the top two cryptocurrencies is likely due to the fact that new users turn to Bitcoin due to its stronger brand among the general public in times of economic turmoil (Brexit, Trump elections, India demonetizing rupee notes, Chinese capital controls…). 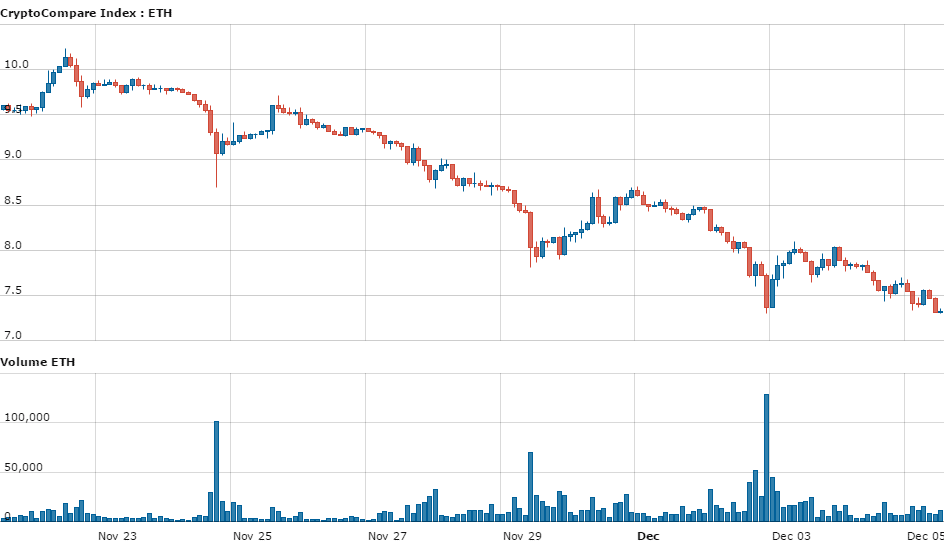 The reason behind the apparent lack of enthusiasm for ETH on behalf of cryptocurrency traders is that they choose to focus not on the high number of cases of Ethereum adoption and integration that we have seen in recent months but rather on its cyber attacks and development issues.

Charles Hayter, the CEO of CryptoCompare.com, explains: “The price of Ether has recently dropped to a 7-month low, currently at $7.40, after a series of technical problems within the network, including the DDoS attacks suffered in the past months and the recent accidental fork experienced due to an irregularity in the Geth client.”

The market is wrong on ethereum.

The scammers that keep pumping & dumping it on poloniex will one day end up in jail . It has had hacks, attacks & bad news non stop since the DAO hack but poor bagholders are still created being ripped off due to manipulated price action on polo. if your doing your due diligence now stay away from this, it will die & you will lose your money. Eventually the pump / dump team will pull the carpet & move on to the next coin leaving your with worthless vaporware. its impossible to this with bitcoin as there is so… Read more »