Another day, another ride on the Bitcoin rollercoaster. From a level of around $670 yesterday the price of Bitcoin dropped almost as low as $540 today before returning to a level around $590 now. The total market capitalization of all bitcoins in circulation has dropped from a high of over $11 billion ten days ago to just over $9 billion today – a loss of $2 billion dollars in value in a very short time period.

Yesterday the majority of the estimations for the cause of the crash involved service outages at Bitfinex and residual fallout from the DAO attack hurting the credibility of cryptocurrencies. Today however, with the monumental Brexit vote taking place in the UK, it is likely that traders are simply reacting to the latest news from the country. The remain camp seems to be winning at the polls which takes the wind out of the worry that the GBP will crash and the need for a hedge with Bitcoin.

Another major factor to take notice of today is the massive trading volumes over the last twenty four hours – $288.5 million in total – about four to five times the normal volume. This may indicate that more than just speculators are in the market today, investors might be pulling serious cash out of Bitcoin to place on a GBP bounce. 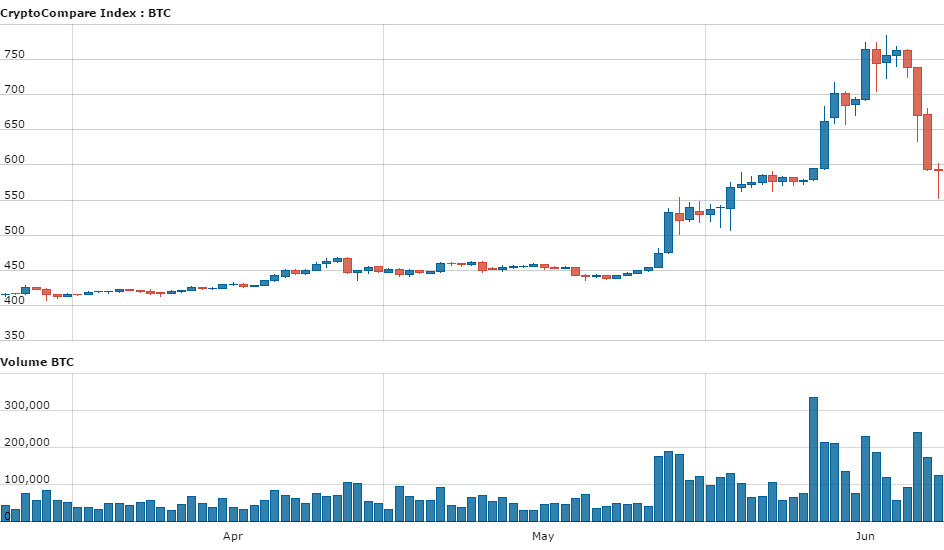 Charles Hayter, the CEO of CryptoCompare.com, commented on the situation traders are facing: “Bitcoin markets are paring back gains despite positive moves in various quarters – its a mixed bag of news with brexit and circle’s raise. Markets are in a quandary and the result is volatility.

Volumes are huge with the USD/BTC pairs seeing a near record breaking highs of 280k BTC – USD 170 million – a 12% market share of trading with CNY BTC dominant at 84%.”

Something few seem to have noticed is that this recent Bitcoin price plunge coincides almost exactly with the recent news release about Dr Craig Wright filing over 50 patent applications on Bitcoin and the blockchain. There have been rumours and stories about Wright before, but this is the first time patents have been applied for. He is generally discredited among the Bitcoin community, but if his patent applications are granted it could destroy Bitcoin completely. Also noticeable on this crash is that the Canadian market started its plunge hours before any of the other markets. Curious.