The father of all cryptocurrencies, Bitcoin, has been on a strong rally in recent weeks with regard to its price as well as its overall market valuation. After going up as high as $588, the BTU/USD exchange rate is now at $574, an increase of about 10% from last week.

In terms of value, the total capitalization of all bitcoins in existence is now just over $9 billion again, a benchmark not seen since February 2014. For comparison, the market capitalization of online money transfers firm Paypal (NASDAQ:PYPL) is about $45 billion, already less just five six times that of the bitcoin network.

What seems to have upgraded the U.S dollar value of Bitcoin by $1 billion in a week is the narrowing of the previous huge spread between exchanges in China and international ones. When we reported on the market last week, at the largest yuan exchange Huobi bitcoin was already traded at around ¥3780 (worth about $575) but the international price was just $520.

Its also important to notice that the rise in the value of Bitcoin did not come at the expense of over cryptocurrencies as the overall market capitalization of all cryptoassets combined is now above $11 billion. The leading contender for the crypto crown, Ethereum, is at $1.1 billion. Following it are Litecoin at $221 million, Ripple at $202 million, the DAO at $150 million and Dash at $50 million.

Looking at a yearly comparison, we can see that Bitcoin has more than doubled in value as on May 29th, 2015 the BTC/USD exchange rate was just around $225 and the total market cap of Bitcoin was just $3.2 billion. 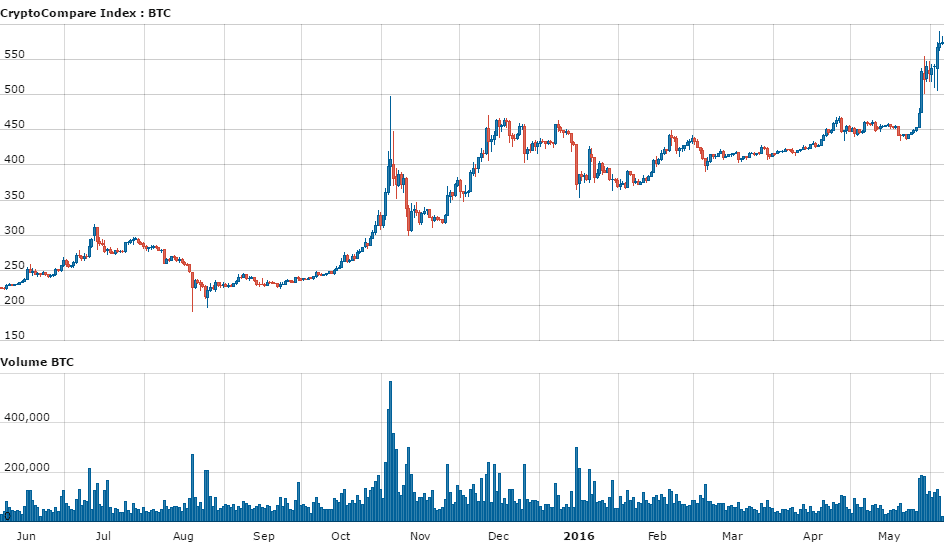