If 2018 was a year of doom, gloom, and deflation for the cryptocurrency industry, it could be said that 2019 was a year of rebirth. The bear market that plagued crypto for most of 2018 and the first quarter of this year abruptly came to an end, while the months that have followed haven’t been an entirely upward trajectory, the voices crying out that crypto is dead have been quieted.

However, the new life (and new capital) that has been injected into crypto this year has brought with it a new breed of cynical optimism, particularly when it comes to altcoins: the blind maximalism that characterized the industry in late 2017 is gone, replaced by a friendly grim reaper–much obliged to let thriving coins and concepts pass, but quick to take weaker networks to the chopping block.

”If your right hand causes you to stumble, cut it off, and throw it away from you.”

In other words, the lifeblood that’s been flowing into crypto doesn’t flow quite as freely as it may have in the past; the process of narrowing and pruning that began in 2018 is continuing, though perhaps at a different clip than in the past.

Adam Todd, founder and CEO of non-custodial, commission-free cryptocurrency futures exchange Digitex Futures, explained the shift in the altcoin landscape this way: “since the turbo-charged years of 2017 and 2018, many altcoins have fallen by the wayside,” he said to Finance Magnates.

“The problem with having such an easy vehicle to raise money is that too many eager teams and projects did raise money–and then had no idea what to do with it.”

Indeed, it wasn’t so long ago that “everyone was riding the blockchain train and convinced that it provided a magic solution to all the world’s ills.”

However, “they would later find out that it was simply impossible to deliver on their promises. Whether intended to be scams or just failed projects, more than 1,200 altcoins have been officially declared dead since 2017.” DeadCoins.com, which lists failed cryptocurrencies and ICOs, lists that figure at over 1,800.

Truthfully, “blockchain is still in its infancy,” Todd said. “Even major chains like Ethereum are still working toward scaling solutions they believed were much closer at hand.”

Therefore, altcoins that have managed to survive thus far have had to continuously roll with the punches. “The role of altcoins has changed in 2019 and it hasn’t been easy,” he continued. “They’ve had to mature, stay the distance, withstand accusations and a bear market, and think of innovative ways of funding their projects further to completion.”

The altcoin sector is “a savage landscape filled with the rotten corpses of the well-intentioned.”

And if the 2017 crypto boom was a fertile, green field on which almost any altcoin could grow, what does the altcoin world look like today?

“It’s a savage landscape filled with the rotten corpses of the well-intentioned,” Todd said. “Only the battle-hardened have stayed and will continue to stay the distance. Altcoins have had to prove their use case, whether it be a means of payment or integral to the project and essential within its core ecosystem. All the fluff has been trimmed.”

Nearly every #altcoin in 2019: pic.twitter.com/vYkHTl6JGk

And no coin is too big to fall, Todd said; at the same time, altcoins created by real scholars and developers like Cardano and Tezos finding their feet.”

“Only altcoins with a strong use case will survive as we move on into the coming year.”

Adoption and privacy have proven valuable assets for altcoins

Still, though, in spite of the gloom and doom, the altcoin sector as a whole grew throughout 2019–data from CoinMarketCap shows that at the beginning of the year, the total market cap of all cryptocurrencies excluding Bitcoin was roughly $60.5 billion. At press time, that figure was closer to $65.5 billion–a modest increase, perhaps, but an increase nonetheless.

So then, which are the altcoins have managed to maintain–or even grow–their footholds in changing market conditions?

Sukhi Jutla, COO of blockchain B2B platform for the gold and diamond jewelry MarketOrders, told Finance Magnates that the coins that she’s observed to have a continuous strong performance are those that have seen the most adoption; those that have “had buy-in from many participants who would use the coin.”

The greatest lessons I learned from the 2018-2019 altcoin shakeout it this.

Most cryptocurrencies fight a losing battle with price vs purpose.

Purpose and use case will be the great equalizer next bull run.

“This is key for any success,” she said, pointing to Ripple as an example. “You need to have your stakeholders onboard and Ripple managed to do this well by getting trust and confidence from the banks who would use Ripple.”

Jutla also pointed to altcoins that have consistently delivered on promises of privacy: “Monero has also stood the test of time,” she said.

“Users value their greater levels of privacy. Dash altcoins continue to do well as a payment method which has proved to be faster than Bitcoin. And of course, Ethereum continues to go from strength to strength which has been driven mainly due to the number of applications being built on this network.”

Alex Lindenmeyer, Co-Founder of crypto portfolio tracker Accointing AG, also pointed out to Finance Magnates that many coins that have staking have managed to grow their share of the market–or at least hold onto their market shares fairly consistently– throughout the year.

What is staking, exactly? Binance Academy describes the practice as “Staking is the process of holding funds in a cryptocurrency wallet to support the operations of a blockchain network.

Essentially, it consists of locking cryptocurrencies to receive rewards.” In other words, users have the option to “lock” or “stake” their tokens in a blockchain network in exchange for the ability to perform duties such as confirming transactions–and to receive the associated rewards.

Research from Binance Academy found that “as of October 24th, 2019, the largest 10 crypto assets supporting (or planning on supporting) staking represent a cumulative market capitalization of $25.8 billion.” The total market cap of all cryptocurrencies around the same time was roughly $205 billion.

“Staking chains such as Cosmos, and Tezos have seen large spikes largely not due to utility but [because] users can receive an income from staking,” Alex explained, adding that this can result in increased interest from investors and subsequently higher prices.

Indeed, Tezos’ market cap increased from roughly $283 million at the beginning of the year to $1.1 billion at press time, with a token price increase of around $0.46 to $1.51 over the same period. 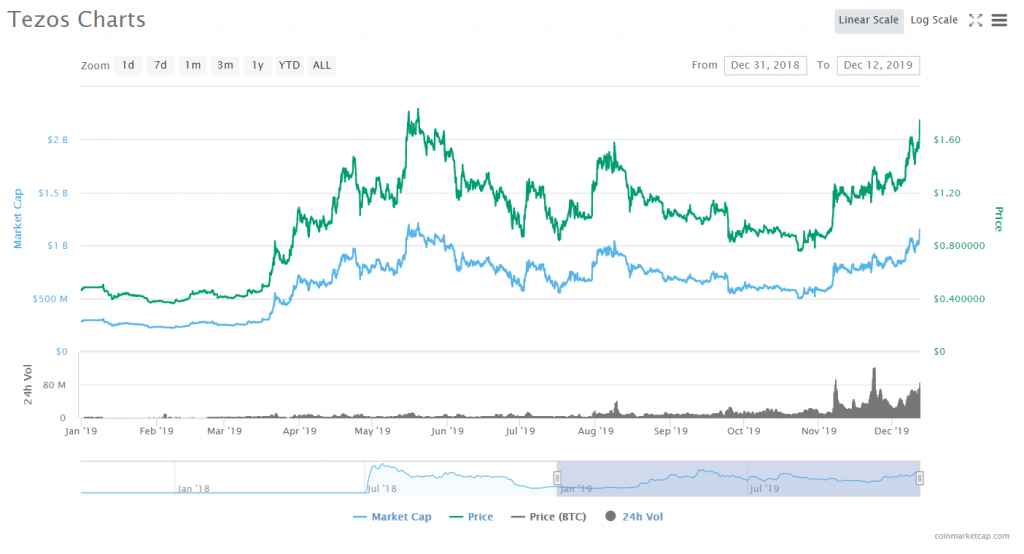 Cosmos’s market cap, on the other hand, has not grown since the release of its token earlier this year. However, like many other blockchains that offer incentivized staking–including Algorand, EOS, and Dash–its market cap has managed to stay fairly consistent throughout 2019.

Stablecoin sector has grown considerably, fueled in part by the role of stablecoins in DeFi

“On the other hand, stablecoins did well largely because of the utility in decentralized [finance],” or DeFi. To this end, Lindenmeyer pointed in particular to the roles that stablecoins play in cryptocurrency-based lending platforms, such as Compound, ETHLend, or BlockFi.

Indeed, blockchain startup Graychain issued a report in August, estimating that $4.7 billion has been lent out over the history of the crypto lending sector–and that the sector was growing quickly. Indeed, Graychain found 5,462 new loans worth $64.8 million in the first quarter of the year; in the second quarter, there were 18,562 new loans worth $159.3 million.

Lindenmeyer also said due to their increased availability, the rise of stablecoins over the last year may have been partially fueled by investors seeking alternatives to volatile crypto coins who didn’t want to exit crypto markets completely: “with prices appreciating and depreciating, people often choose to go into stable cryptocurrencies rather than directly into the fiat currency of their choice,” he said.

Exchange tokens are on the rise

Finally, Lindenmeyer said that “exchange tokens had a run in the earlier part of 2019 as these were somewhat ‘new models.’” However, the success of Binance and its BNB token could have fueled a significant uptick in both the number of exchange tokens and the increase in their trading volumes.

Indeed, The Block Genesis reported that “even though there has been a 43% decline in the last four months, the market cap of exchange tokens has still grown by 255% since the beginning of the year.”

Lindenmeyer explained that “exchange tokens increased in price as people understood the utility that the exchanges would buy back tokens (or ‘burn’ portions of the token supply) with a portion of their revenue each month or quarter.”

Indeed, BNB, which Business Insider described as “the only major cryptocurrency outperforming bitcoin this year,” plans to burn half of the total supply of BNB (roughly 100 million coins). 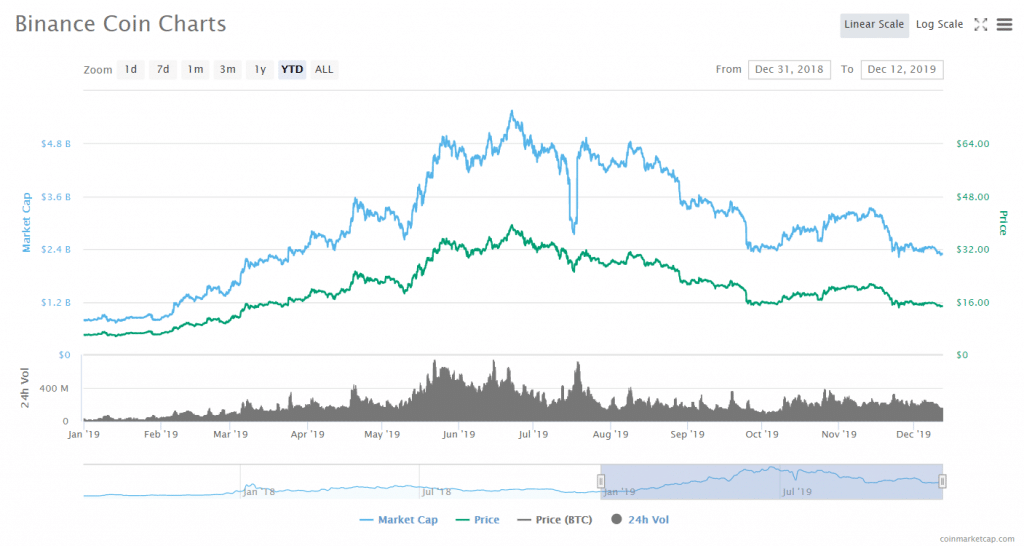 Adam Todd told Finance Magnates that he believes that exchange tokens “will continue to thrive in 2020. As we’ve seen from BNB, KuCoin Shares, Huobi Token and more, they have a proven use case and incentive for holders and traders. Beyond reduced trading fees, they often have a good ROI for holders.

Todd added that his own exchange’s native token, DGTX, plays a pivotal role: “it isn’t just a vehicle for reduced fees–it’s mandatory for trading on the platform,” he said. “This creates a constant demand for the token and a clear-cut, critical role. As the lifeblood of the exchange, it also enables us to provide zero-fee trading.”

However, the popularity of the tokenized exchange model could potentially result in an oversaturated market.

So many exchanges have stepped into the spotlight recently, with only a very small handful actually becoming successful.

Has the exchange bubble finally popped?

More altcoins are on the docket for the year ahead–but does the world really need more cryptocurrencies?

As the fight for survival in the altcoin sphere continues, more and more coins are being created at regular intervals–though not as quickly as they were coming in years past.

“The number of altcoins coming to market has fallen when you compare it to 2017 and 2018,” Sukhi Jutla said. “This is mainly due to investors scrutinizing new coins and wanting to understand better how the coin can be used for the long term.”

Indeed, investors are savvier than they were in the past: “they now need proof of the coins ‘staying power’.”

Mfw I try to justify 90% of my 2019 altcoin purchases in front of myself… pic.twitter.com/rNYOJs1LY8

Therefore, “I predict we will continue to see altcoins coming to market,” Jutla said, “but there will be more pressure on the creators to convince investors that their coins are here for the long term, can provide value and compete against Bitcoin as a credible coin of value.”

Lindenmeyer also noticed a slow in the flow of the creation of new coins–although, he said, the decrease in new altcoins isn’t happening quickly enough.

“The rate of altcoin [creation] has decreased as people are starting to realize that simply having a token for marketing, creating a community and printing money out of thin air makes no sense,” he said.

However, for Lindenmeyer, the number of altcoins that exist in the world isn’t ultimately that important: “I’m not sure if the world needs more or fewer altcoins,” he said. However, “I think what is clear to most people is that each altcoin needs to have a unique use case.”

“This is the most difficult part about altcoins, whatever their use–they need to make sense and it shouldn’t make adoption of the product that it is solving harder.”

And, as always, altcoins are a dish that is best served with a healthy dose of cynicism.

What are your thoughts about the ways that the altcoin landscape has changed over the past year? What are your altcoin predictions for the year ahead? Let us know in the comments below.

in my opinion, I expect altcoin has a bright future in the upcoming year.