Paxful is a Bitcoin exchange that allows people who want to trade currencies for Bitcoin nationally, to be brought together. It is a popular alternative option to Local Bitcoins. One of the key reasons for Paxful’s demand is the wide range of payment methods it can accept.

The exchange was established in Delaware, USA, in the year 2015 by a group of experienced developers. It was founded by Ray Youssef, who launched several startups and unusual projects before establishing the company and is special in a number of ways. It is a peer-to-peer marketplace where buyers and sellers post trade offers. In many ways it akin to eBay; and not necessarily a merchant for Bitcoin. Paxful positions itself as a sort of mediator between numerous and provides a public place for consumers to showcase their demands.

Bitsonline spoke with Paxful’s co-founder Artur Schaback to share some of his experience on how to get involved in bitcoin trading. Click the link to read more! https://t.co/rg6XzwJbmD pic.twitter.com/C0qsINTqap

Paxful does not charge the buyer when they are purchasing Bitcoin. Instead, the buyer will be given a fee at the seller’s discretion; a figure that can vary depending on the payment method being utilized.  These fees can sometimes be quite significant, especially for less common payment methods such as gift cards.

The individuals behind Paxful look to offer an easy, fair and secure platform that will let people trade value.  The site acts as a global peer to peer payment logistics platform and allows Bitcoin trades in the same way that eBay facilitates the trade of everyday goods. 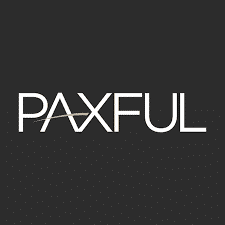 Paxful is a bitcoin exchange, which offers a wide array of payment options for the buyers. Bitcoin can be traded with bank transfers, cash deposits, gift-card, e-wallets, money transfers and PayPal among others.

BTC/USD is the most popular trading pair on Paxful. Trades take place all around the world, including places such as Africa, where the population is majorly underbanked.

Paxful runs a thorough support system, and the support team is generally fast to respond. Users can contact the support team through a range of options such as direct message, email, phone, and social media.

Traders on Paxful are given a ranking based on their activity in addition to their trading history. Feedback ratings are open for everyone to view.

There have been some mixed reviews on Reddit in regards to Paxful, so it may be worth weighing up all your options in deciding whether this is the right medium for you.

Their support team can be contacted at https://paxful.com/support. 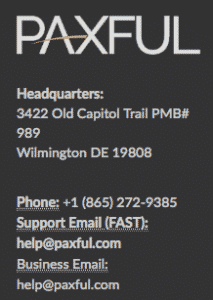 Paxful is security is offered by Comodo, which indicate that all delicate data is under encryption by 256-bit SSL, and the site is in full compliance with PCI vulnerability standards which ensure that the environment is safe and secure as possible for its users.

Paxful Wallets need complex passwords and two-factor authentication which are designed to ensure security. Enabling 2FA for your wallet to be protected, and offers an additional layer of protection against potential hackers.

When users trade on the site, their funds are held in escrow until both parties have confirmed every part of a transaction.  This functions as a way to protect traders and allow for far smoother transactions.

At this moment in time, Paxful does not have a license from any financial authority which can be worth keeping in mind. It is based in the USA however, so it must adhere to certain regulations and laws of the country.

Buying bitcoin with Paxful can be a relatively easy process. Once you have created an account, you will be given a free e-wallet from the exchange. At this point, you will enter how much you are willing to spend and be able to choose your payment method from their selection.

Paxful can be used by anyone and the amounts you trade can vary depending on your funds and the seller rates. The sellers ultimately decide the limits that are placed on a given transaction and these can vary. The time of a trade also varies depending on the payment method used and how the buyer and seller have agreed to conduct the transaction.

Mobile applications as well as a virtual kiosk widget also available to users.

Verification is not essential, and certain buyers and sellers may conduct transactions without them, though this may not be secure, and would not be recommended.