Last week we reported that GMO Internet, Inc. (TSE: 9449) revealed that it has decided to participate in the cryptocurrency exchange and trading business and already established a bitcoin subsidiary, GMO Wallet Co. Ltd. While the news made the rounds in the bitcoin community forums, most people didn’t seem to understand that this story has much more importance to the online trading industry than just another Bitcoin wallet launch in a market full of cryptocurrency wallets.

According to latest data from the Finance Magnates Intelligence Department, GMO Click Securities Co. Ltd. – the Japanese conglomerate’s online financial trading subsidiary – is the biggest forex broker in the world with by far the highest trading volumes in the industry globally.  And while Japan acts as an isolated island in terms of FX regulation, it is a trendsetter in terms of the technology used for trading and the practices traders use. This means that if GMO decides to incorporate FX and Bitcoin trading, many others will follow.

Want to learn more about Bitcoin in Asia? Bobby Lee, the CEO of BTCC, will be giving the keynote speech about Bitcoin and China at the iFX EXPO in Hong Kong, register now.

As a group, GMO consists of dozens of subsidiaries and they are not all related to each other. In this case however, it has an interest in eventually bringing bitcoin trading to its established margin FX business – to leverage the potential of its legions of traders.

For years now there have been talks about why bitcoin needs to be part of the product offering profile of every online retail broker – volatility, unrestricted transfers and 24/7 trading chief among these. And some brokers indeed do now accept bitcoin payments (through third party providers) but if they offer trading it is mostly just on CFDs, not buying and selling the real deal. Fewer still have even heard about alternative cryptocurrencies, with a notable exception being FXOpen which launched both Ethereum and Dash support. 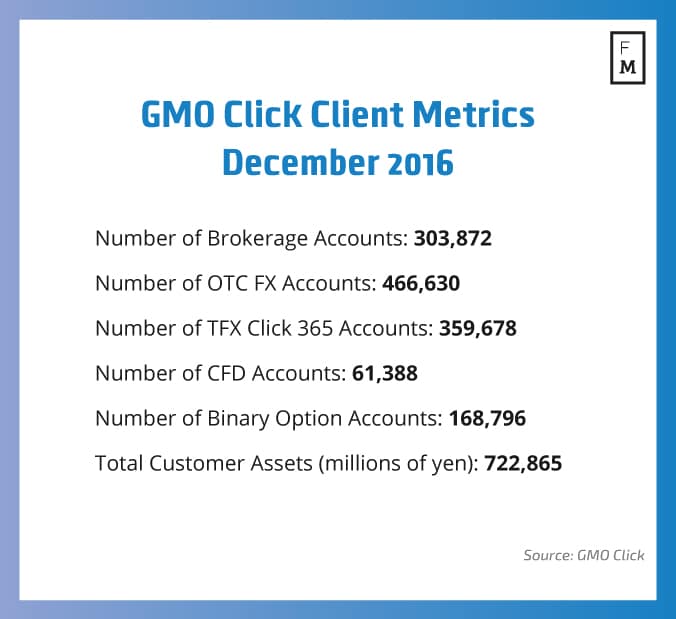 In its announcement, GMO referred to Ethereum specifically and did not limit its scope to only bitcoin. It can be assumed that whichever cryptocurrency GMO decides to accept as the payment method in its wallet, competing Japanese brokers will need to follow suit, and eventually most of the industry’s technology providers will have to catch up.

Right now, despite offering a similar trading experience and appealing to the same type of traders, the margin FX and margin Bitcoin trading industries are very separated. If GMO proves that this can’t last, expect the markets to merge as more forex brokers launch cryptocurrency services and more startups coming out of bitcoin exchanges expand to offer traditional FX, CFDs and binary options, possibly via M&A activity.

Changes to the regulations in Japan that will make bitcoin trading more like FX trading in terms of taxation are expected in the spring of 2017. The industry will watch to see how the situation develops.