The world of blockchain based currencies and financial instruments is quite likely the most challenging field in business to summarize on a yearly time scale. It has the fastest changing ecosystem of companies and projects, with new cryptocurrencies rising up seemingly out of nowhere and disappearing just as fast.

At the same time the technology of the blockchain is also being used for disrupting many other sectors of the economy at such a speed that it’s hard to keep up with all the daily updates. For this we have chosen just four big stories that dominated the news this year and spanned 2016 as backdrop to everything else.

After a long period in which no altcoin got even remotely close to bitcoin in terms of adoption and market share, an innovative new contender emerged in 2016 in the form of the smart contracts cryptocurrency, Ethereum.

By mid-June the price reached $19, the market cap of Ethereum topped $1.5 billion and it seemed that the creators of the smart contracts blockchain could do nothing wrong. But then the DAO came along. 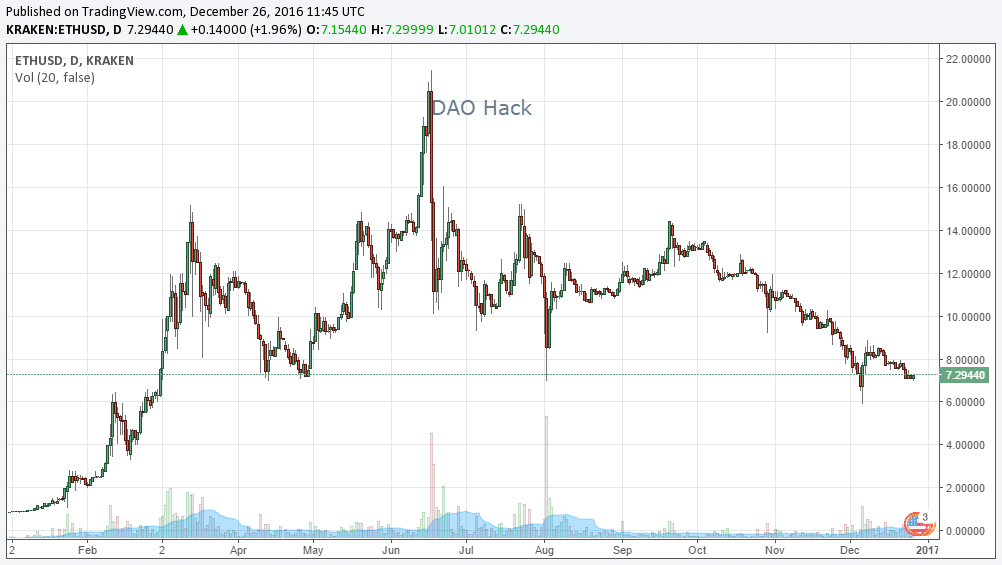 Looking to create an investment fund for early stage Ethereum ventures, such as its Ethereum Computer, Slock.it created the DAO (Decentralized Autonomous Organization). During its 28 day crowdsale in May the DAO raised over $150 million in ETH from over 11,000 investors and the future couldn’t have looked brighter for Slock.it, the DAO and Ethereum.

In early June an Ethereum developer wrote publicly that he found a flaw that would allow hackers to target the DAO. On June 17th the attack began and the DAO was bleeding money fast.

Reacting fast, the creator of Ethereum, Vitalik Buterin, called on everyone to spam the system to prevent any further transactions from taking place and called on miners to increase the gas price. The attack indeed stopped but not before the hackers siphoned away 3.6 million ETH.

After the DAO debacle, the Ethereum blockchain underwent a hard fork under the leadership of Vitalik Buterin, as a measure to reset the system to its state before the DAO hack, but a renegade group of users refused to honor the new branch and splintered off.

Now the Ethereum community is split between the official Ethereum (ETH) and the new ‘Ethereum Classic’ (ETC) with many accusations of foul play from both sides. Due to this the market value of Ethereum (ETH) sits at just $635 million at the end of 2016. Even with Ethereum Classic (ETC), which controls a market cap of $91 million, the two cryptocurrencies combined are nowhere close to the pre-DAO value.

One of the most interesting and important stories in the blockchain sphere that remains almost completely under the radar of mainstream financial newspapers is how entrepreneurs created an alternative path to raise public funds with cryptocurrencies and tokens instead of stocks.

Initial Coin Offerings (ICOs) are a new way to raise money via crowd-funding process. The process works by selling blockchain tokens that carry an inherit value within the system, or even part of the ownership of the venture, to fund its development. 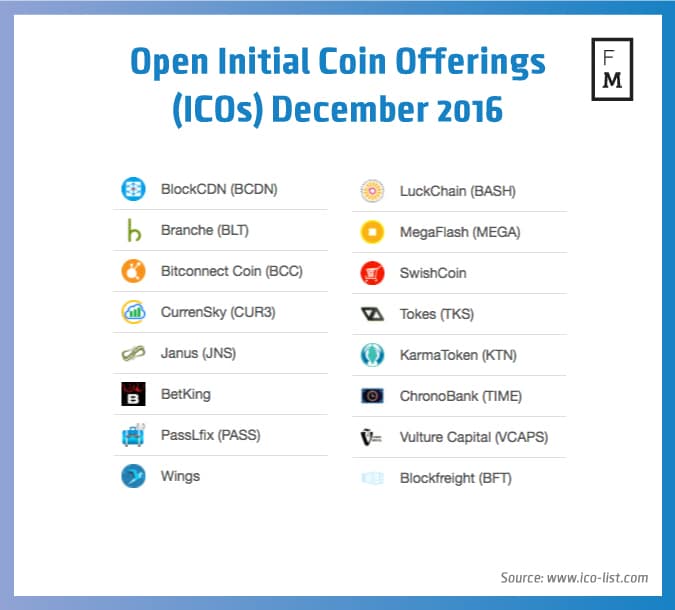 If this sounds a bit like an initial public offering (IPO) that’s no coincidence, but an ICO carries none of the legal requirements or any stock exchange or issuer scrutiny, and therefore it is much faster to set up.

The first cryptocurrency has seen a very turbulent 2016 with different sections of the ecosystem at each other’s throats. The biggest example for this was when veteran bitcoin programmer, Mike Hearn, publicly announced that bitcoin is a failed experiment, actually worse than the current financial system and on the brink of collapse.

Hearn said that the system suffers large backlogs, cited fears that recent changes allow buyers to take back payments after walking out of shops, and said that transaction fees were wildly unpredictable, high and rising fast. Most dramatic were his determinations that the people leading bitcoin are in “open civil war” and that the system has become “controlled by China.”

The underlying reason for most of the current issues is the ongoing clash between those who think increasing block sizes is critical and should have already occurred, such as Hearn, and those saying that a resolution of the issue can be postponed further until it is widely adopted. The consequences of this civil war led to influential online forums censoring all information on alternative solutions that they did not agree with as well as massive cyber-attacks on competing implementations.

A possible light at the end of the tunnel has appeared with the release of SegWit, but the matter is far from over.

Despite all of this, the price of bitcoin recovered a lot of ground in 2016 and even set new total value records due to supporting outside factors.

Starting at $430 on January 1st, the price more than doubled by December 23rd as the BTC/USD exchange rate hit $900. This marketed a return to the levels of the heyday at the start of 2014, almost three years prior. The high price, in addition to the newly mined bitcoins added to circulation, brought the overall market capitalization of the original blockchain to $14.5 billion for the first time ever.

The factors that mostly contributed to this were severe and unforeseen economic changes that injected volatility into the markets and sent scared people to bitcoin as a sort of safe haven. Yuan devaluation in China. Brexit. The election of Donald Trump as the next US president. All were factors.

In the background was also the ‘war on cash’, as governments and central banks were considering phasing out paper money. This global push for a cashless society was most exemplified in India, where the Prime Minister Narendra Modi announced without prior warning that high-denomination rupee notes, representing about 80% of all cash holdings, are to be taken out of circulation immediately.

The 2016 trend that will probably have the most lasting effect on the financial world in years to come is the eager adoption of the underlying infrastructure of bitcoin, the blockchain, by banks and other institutions.

This year we have seen blockchain technology tested and adapted for seemingly every aspect of digital transactions in the business world. This was cheered by mainstream publications such as FT and The Economist as having the potential to completely disrupt and revolutionize all industries. By the end of the year it has already led to calls of the danger of over-hype and letting the air out of the bubble.

Still, this is without question a technology that will change the way trade is executed and recorded.

Making any kind of gamble on the price or even trajectory of bitcoin in any particular period has proven to be very hard so I will spare you mine. However, it is possible to give educated guesses as to where the technology and ecosystem is headed based on current trends.

We seem to be at the peak of hype for blockchain in finance so we can safely expect a backlash in 2017 in accordance with the common life cycle for all technologies. We might see the folding of all the firms that jumped on the bandwagon just because they thought they can get money from investors on the back of a popular buzzword. Meanwhile the real useful applications of the technology could be developed in quiet until a resurgence occurs.

ICOs will continue on pace as they offer a way to finance any project without much hassle. No big scandals in the field have come to light in 2016 regarding ICOs, but with the widespread fad attracting all sorts of people that see it as an opportunity to make money fast, it might not be long before something explodes and brings more scrutiny to the ecosystem.

Bitcoin seems to be moving farther away from being a method for quick and frictionless online transactions and more toward a store of wealth, like digital gold. Complementing solutions and other cryptocurrencies will continue to evolve in order to fill the vacuum for microtransactions and fast execution until this changes. In the meantime it will remain primarily a tool for Chinese traders to speculate to protect against the devaluation of their funds and as the easiest on ramp for hackers to get cryptocurrency from ransomware.

Thank you for your post. This is excellent information. It is amazing and wonderful to visit your site.It really gives me an insight on this topic.