GMO Click Securities, one of the largest brokers in Japan, has reported its binary options statistics for the month ending March 2016, which saw lower number of traders incur financial losses with their binary options relative to February, according to a GMO Click statement.

GMO Click reported its transaction proportion of loss occurrence during March 2016, effectively aggregating the number of accounts whose total monthly income has drifted into negative territory. In particular, the latest figures at GMO Click’s showed that 76.90% of binary options accounts lost money during the month, which was a slight improvement.

March’s mitigated losses indicated that fewer trading accounts had suffered monthly losses than in February 2016, which had disclosed a figure of 77.81%, a fall of approximately -1.2% MoM and the lowest figure since November 2015. However, March’s figure does constitute the lowest in the 2016-year thus far, trending lower since December 2015.

In addition, GMO Click’s Ladder Options, a legal type of option available for trading in Japan, reported its total transaction amount as a percentage of the total client payment amount reaching 98.31% in March 2016, climbing to 96.10% in January 2016 – this was reflective of a 2.3% growth MoM, effectively oscillating in every month during 2016. 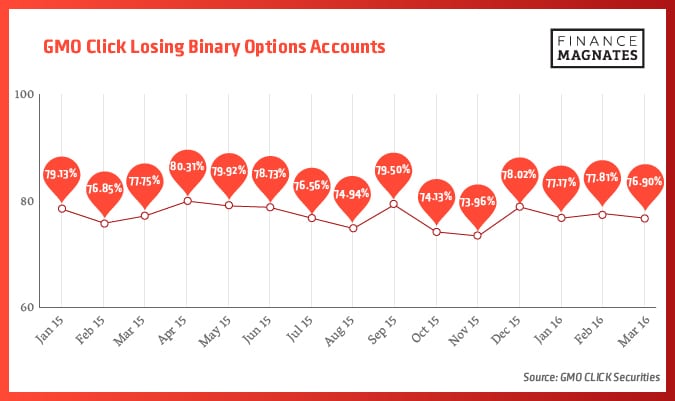