Last week proved a very tough week for holders of precious metals following the flash crash at the outset of the trading week. On the whole, precious metals are a valuable diversification component of any carefully structured investment portfolio, but that does not make it any safer and mean that prices have only one direction to trend as evidenced by the latest price action.

On the whole, investors use gold as a haven asset to protect against two phenomena: inflation and uncertainty.  The broad indication of commodities right now is that deflation has already arrived and is here to stay just as policymakers attempt to move away from the zero bound in monetary policy.

When gold prices fell through the critical technical level at $1132 per troy ounce the week before, it raised some significant questions about the outlook. The rapid ascension in the dollar and slight improvement in the economic outlook was echoed by the Federal Reserve in the form of jawboning about the gradual pace of rate hikes and the fact that liftoff will come sooner rather than later.

This is very relevant considering the US dollar’s strong inverse correlation with precious metals and reflects growing confidence in the ability of the Central Bank to raise rates.  However, when it comes to Central Bank mandates, the Federal Reserve is missing the boat with respect to the longer-run 2% inflation target.

The confluence of factors both internal and external acting upon the US economy have seen the inflation measure fall in-line with developments in the global economy as the downturn in trade sees pricing weaken across goods and services. The US is currently experiencing annualized inflation around 0.10%, well below the 2% targeted, as the rout in energy prices and weaker underlying fundamentals drag on the figure.  The United States is not alone in facing the potential fallout of deflation as evidenced by the experience of other developed global economies.

The United Kingdom is experiencing longer-run inflation at 0.00% while the Euro Area is experiencing marginal amounts at 0.20% while Switzerland is deep in negative territory, with annualized consumer prices falling at a -1.00% pace.  Gold is typically a very strong hedge against inflation because the barbarous relic is used as a store of value.  However, in a deflationary environment, the value of holding safety instruments such as gold quickly loses its appeal.  With higher inflation and hyperinflation off the table, a resurgence in gold prices on the back of inflation is highly unlikely.

Aside from the inflationary hedge, gold serves as downside protection against uncertainty and poorly formed monetary policies. It is surprising that amid a serious downturn in Chinese fundamentals gold prices have barely budged to the upside. Although Greece is not as serious as the rout in China, it still does have an impact and could be the driving force behind contagion across peripheral European sovereign bonds. Gold is far more reflective of faith and confidence in Central Banking. When the faith in a government’s taxation abilities and the value of fiat currency are tested, gold is the main benefactor, as it has been for centuries. However, the current environment seems to reflect new faith in the process with the main driver behind recent gold price momentum being developments in the US dollar. 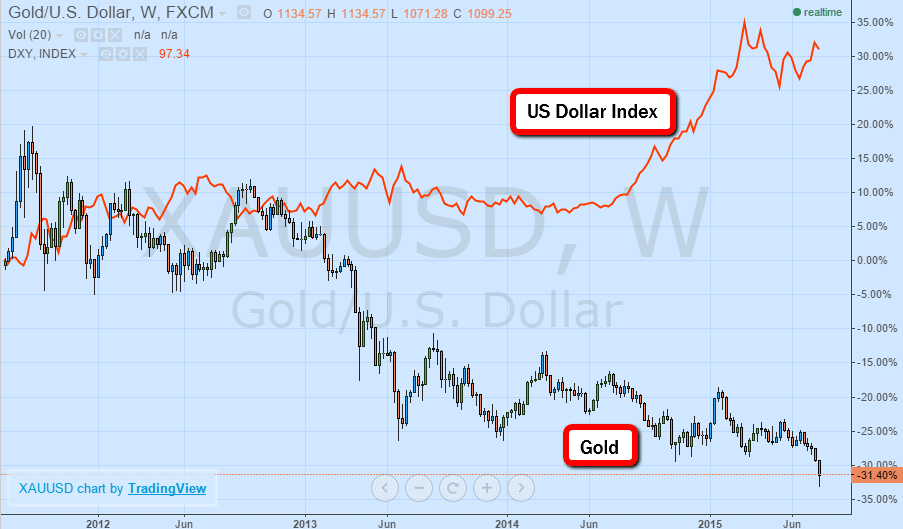 All the fundamentals point to a weaker outlook for gold prices as inflation and uncertainty trickle lower, tugging gold prices further to the downside. There are few fundamental reasons for holding the precious metal on paper, especially considering that paper contracts are estimated to outnumber physical bullion by approximately 90 to 1. This makes gold very prone to manipulation with the paper and physical markets very well connected.

The flash crash experienced Monday morning exhibited this tendency, after gold prices lost over 4% in under a minute before recovering modestly. If anything, the dump of $2.7 billion in notional contracts should be a warning to the gold bugs that there is still a substantial amount of deleveraging possible even in the precious metals space. 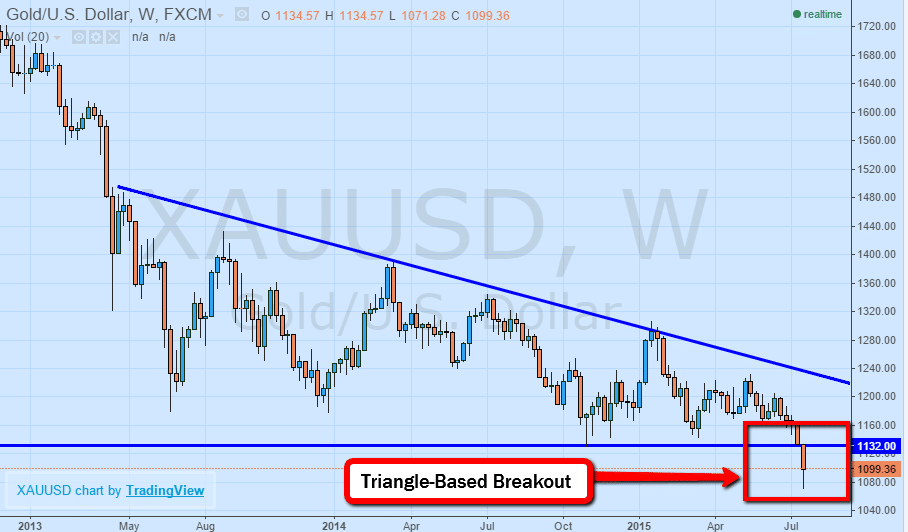 From a technical perspective, gold broke out to the downside after moving below key support in a long-term descending triangle formation at $1132. That broke the downside wide open, making it exceedingly possible that gold would trend towards another major level at $1050 before potentially slipping as low as $950.

Even though there is substantial hype, especially from sell-side media saying the drop will worsen, it will probably not be as dramatic or swift as pundits would like to believe.  Nevertheless, risks are acutely biased to the downside based on the inflationary outlook and momentum higher in the dollar. 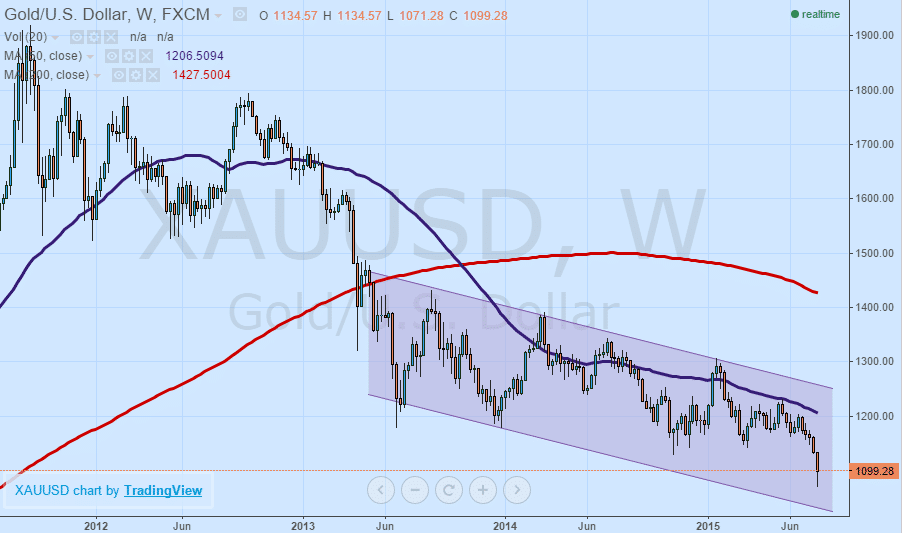 Now that support has broken, gold prices are setting up in a downward trending, medium-term equidistant channel pattern.  The pattern has bias to the downside, further confirmed by the gold prices remaining below both the 50-day and 200-day moving averages, each of which are sloping to the downside.

The expected reward from short positions at the upper channel line targeting the lower channel line is over 200 points, but prices revisiting levels 200 points higher in the near-term is very unlikely unless there is a dramatic turn in geopolitics that sees an outbreak of conflict or conversely the United States enters a hyperinflationary environment.  Nevertheless, with the US dollar momentum not forecast to subside, prices are likely targeted the $1050 after firmly crossing support at $1087.

This week’s flash crash in gold prices sets the stage for much further losses in the barbarous relic. Its limited value in times of deflation and renewed faith in fiat currency diminish its appeal to investors, especially in a low yield environment with other better performing safety assets.

With this in mind, there are several factors that could drive prices higher, but all are absent in the current financial market environment as traders begin to pare risk and look more towards defensive positioning.  Next stop for gold prices is $1050, however, should it slip through these levels, bullion back below $1000 per troy ounce is not a stretch for a gold.