Since the latest European Central Bank press conference in which President Mario Draghi stated an open willingness to consider adjusting interest rates and asset purchases to reflect prevailing economic conditions the euro has fallen precipitously. The combination of dovish commentary and the more hawkish FOMC has seen the EUR/USD currency pair fall over 500 pips since the middle of October as investors position for December and the possibility of liftoff in one economy and further loosening in the other.

Although some Euro Area data points have shown modest improvement, Mario Draghi will really have to keep his promise to “do whatever it takes” if he means to meet the Central Bank’s mandate.

In prepared remarks yesterday intended to focus on non-monetary policy conditions, namely fiscal policy, President Draghi could not help from reiterating his views on the path for monetary policy.  In his statement, he further clarified that the “ECB’s monetary accommodation to be examined in December” and moreover that the “ECB willing to act to maintain monetary accommodation.” These dovish comments pointing towards a more dovish stance come into direct conflict with the observations of two ECB Governors. Explanations given by ECB Governor Hansson the previous week pointed to his own hesitation to discuss policy changes during the December meeting with the ECB’s Governor Rimsevics, echoing the sentiment after stating there was no need to rush to implement further stimulus measures before the end of the fiscal year.

Jawboning in particular can have a very pronounced impact on currency markets as evidenced by these contrasting comments. Mario Draghi’s press conference saw the EUR/USD pair fall over 200 pips before staging a modest recovery, this coming without any announced change in policy, just merely the suggestion that policy could be adjusted in the December meeting. The market did go off to the races with the comment and Euro rate futures are now pointing towards negative deposit rates of between -0.20% to -0.35%. On the other hand, the comment from the Governors was enough to spark a rally in the pair after they confirmed a “wait in see” strategy, maintaining an emphasis on data dependency in contrast to Draghi’s new policy of “work and assess.”  Although this might not mean new action, the idea is that he will remain proactive in his approach to monetary policy.

So far, the impact of asset purchases has been rather limited as evidenced by the latest preliminary Euro Area inflation figures. Headline inflation and core inflation rose modestly to 0.00% and 1.00% respectively, matching the figures that were released ahead of the decision to implement a quantitative easing program. With dissent among governing council members evidenced by the commentary alone, the expectation of a new policy decision amidst the backdrop of a policy that is not bearing results could mean a December dovish decision is not assured. However, with the United States Federal Reserve preparing markets for liftoff, it could mean more downside in store for EUR/USD as the Euro Area struggles to regain its footing despite highly accommodative policy measures.

Market participants have notably been preparing for FOMC liftoff as evidenced by Fed Funds futures managing to tick to the level at which there stands a 50% chance of a rate hike in December. Although also remaining data dependent in its outlook, the divergent policy has been enough to pressure the US dollar to the upside versus most major peers since the latest FOMC Statement. There are risks to the outlook, including upcoming payroll figures which could either seal the fate for December or dent optimism. However, broadly speaking, the Federal Reserve is trying to regain credibility, and this will come at a price that probably includes action, not more talk. 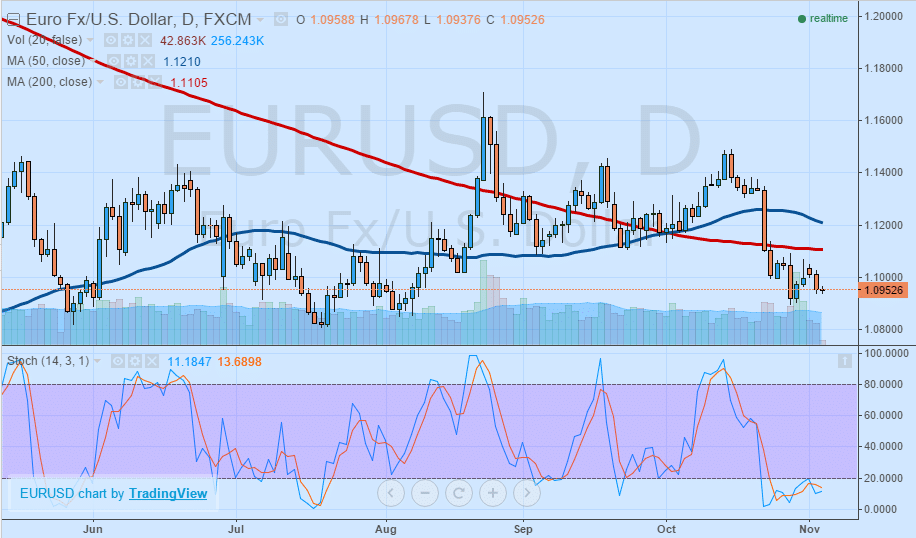 From the viewpoint of the RSI and stochastic oscillator, both measures are pointing to a currency pair that has found itself in an oversold position in the last week or so on a one-day candlestick chart. While indicative of a potential buying opportunity, sustained risks of policy actions combined with upcoming employment data could see that optimism in a rebound quickly wane. Right now, the major level to watch is the psychological level sitting at 1.1000 with any close below viewed as widely bearish, while a close above could be an indication of the early stages of a rally. Critical support right above 1.0800 is the key level to watch in the coming session after EUR/USD bounced off this level in both May and July. A third bounce would indicate a triple bottom and set the stage for further rally, while a break could quickly dispel that optimism, opening up ground for a further descent in the pair.

Risks for the EUR/USD remain broadly biased to the downside over the short and medium-term as the dovish bent of the European Central Bank President Mario Draghi contrasts sharply with the stated objective of the Federal Reserve’s Open Market Committee. While not yet assured that either party will choose to adjust policies to reflect changing conditions, commentary and data to be released in the near-term are certain to define the price action leading up to the decisions. However, in the meantime, despite the downward risks to the EUR/USD pair, should major support hold, it could trend sideways until one of the parties chooses to act instead of merely jawboning.